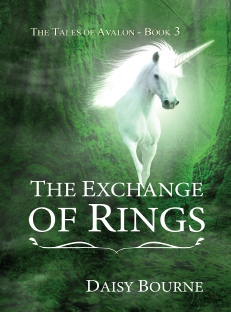 Despite winning the Battle of Merlport there has been little celebration. Too many Avalonians lost their lives, too many were injured. However, the bond between those with magic and those without has grown considerably since defeating the marauding Trajaens.

The Avalonians have now formed a friendship with neighbouring Twydell, a country which once shunned magical beings. A marriage is to take place between Princess Jeanette of Twydell and Prince Steven of Kerner. All the leaders of Avalon have been invited to the wedding, but Esmerelda, Queen of the Witches, is reluctant to accept the invitation. News has reached Avalon that wizards are held in Kernan prisons and Esmerelda is understandably angry and wants to take action. Merlin tries to pacify Esmerelda and find a solution which will avoid more bloodshed.

Secrets are revealed in The Exchange of Rings, the third book in the Tales of Avalon series, but there are others secrets which must remain just so.

Follow the adventures – and romances – of Merlin and Helen-Joy, King Arthur, Prince Edward and Daisy, Princess Rosalie and Prince Derrick, Queen Esmerelda, and many more.

When Esmerelda, Queen of the Witches, receives an invitation to a royal wedding she is delighted. However, she is far from happy when she discovers that other magical beings have been persecuted by her hosts. How will Esmerelda seek vengeance?"

If you like stories about magical beings, you will enjoy reading The Exchange of Rings.