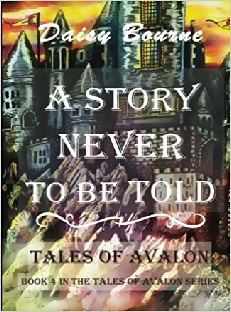 A Story Never to be Told, is the fourth book in the Tales of Avalon Series. What happened to Azgoose, the clever old witch, who created the clouds of goo which delayed the Trajaens at the Battle of Merlport? Although the Avalonians sent out search parties, she was not found. In A Story Never to be Told secrets continue to unfold. In this book we meet the Rabbart lll, the powerful King of Barrmin, and his family. King Rabbart rules all the former kingdoms and tribes in the northern lands. King Rabbart befriends Arthur and the magical people of Avalon.

He offers one of his beautiful daughters in marriage to Edward. Is Rabbart lll’s friendship with Avalon sincere? Will Edward remain loyal to Daisy, or will he marry a Princess of Barrmin to strengthen the alliance between the two countries?

An old woman is washed up on a beach. A poor family's run of bad luck starts to change for the better when she accepts their offer of shelter. They have no idea the old woman be a witch.

The answers can only be found in A Story Never to Be Told.