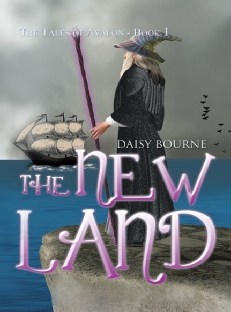 What happened to Arthur, King of the Britons, after he was allegedly killed on the battlefield? Legend has it that Merlin, the mighty sorcerer, put the king’s body in a boat and set it sail for a mysterious place called Avalon. However, many Britons refuse to accept that Arthur was really dead. Instead they believe that Merlin had taken the king to a place of safety. There have been many theories as to the whereabouts of Avalon, but none proven to be accurate.

The New Land is the first book in the Tales of Avalon series. It tells the story of how Arthur, magical beings, and other Britons, fearing for their lives, seek refuge in a far-off land. They hope their new home will be a place where magical beings and humans can live together in peace and harmony. Will the travellers find the new life they so desire? Well they certainly found a land full of surprise and adventure.

The Avalonians soon find that they have to form new and unusual alliances in order to protect themselves against an unexpected enemy.

If you like stories about witches, wizards, fairies, elves, giants, and unicorns, you will enjoy this book.